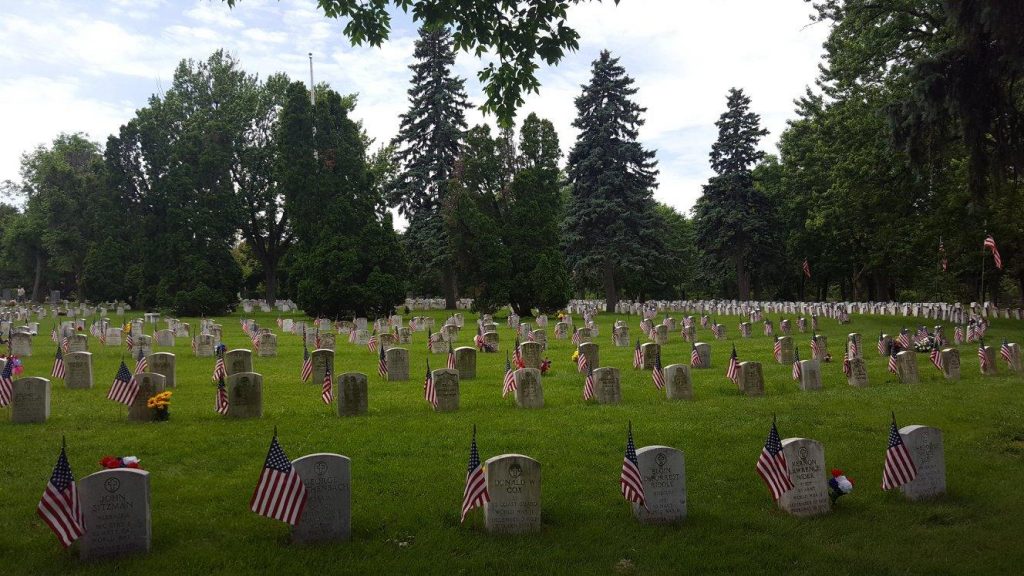 I remember accompanying my uncle to cemeteries as a kid. That sounds like a dark and morbid family excursion, but it was actually anything but. We would walk up and down the rows of grave markers until he found what he was looking for: the final resting place of a Civil War soldier. Once found, he would take out a notebook and scribble down the information given on the tombstone. Sometimes he would take a rubbing, a task I was always eager to be assigned. At the end of the outing, he would take all the info he had gathered and input it into the growing database he kept. In the days before resources like Find A Grave and Ancestry, my uncle was a genealogy and cemetery guru, dispensing knowledge all over family history and Civil War chat rooms and message boards. Faced with having no plans on Memorial Day, I decided to take a page out of his book and spend the afternoon meeting some soldiers who never made it back to their families. 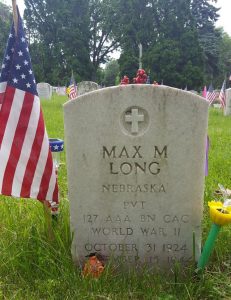 Private Max M. Long was just shy of his twentieth birthday when he was killed near Dover, England by German heavy guns across the Channel in the Pas de Calais. His little sister, Shirley, was at home when her mother received word of his death. She had been allowed to stay home from school to make cookies to send over to her brother for his birthday. I met Shirley, who is now eighty-six years old, as she was decorating her brother’s grave, “just like my mother taught me.”1

Someone had also recently visited the grave of Lance Corporal Richard Lansing Zichek. He was twenty years old when he was killed in the Quang Nam Province in South Vietnam on July 15, 1965. He was the first soldier from Lincoln, Nebraska to die in the Vietnam War; forty-seven more would also lose their lives before the end of the conflict.2 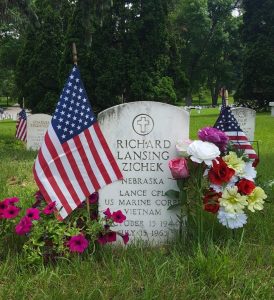 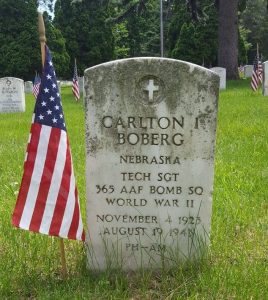 Carlton I. Boberg’s B-17, Patches, was shot down near Averbode, Belgium. The pilot and co-pilot were killed instantly. Boberg, who served as the flight engineer and top turret gunner, was severely wounded in the crash and taken to a hospital in Brussels, where he died two days later. The seven remaining crew members survived and were taken prisoner. Boberg’s body was sent home to be buried.3 His grave is located in the Soldiers’ Circle alongside those of over a thousand other combatants from various American wars. Many of these soldiers survived their military service and received burial years later. Some, like Lance Corporal Zichek and Private Long, were eventually sent home to their loved ones. Others, still, are simply lost. 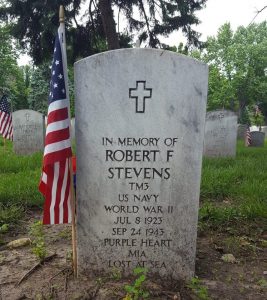 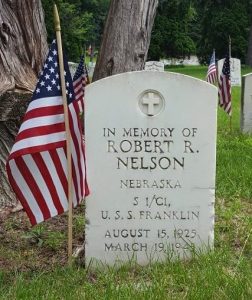 Torpedoman Third Class Robert F. Stevens went missing in action when he was twenty years old. He had been serving aboard the USS Grayling, a submarine patrolling the coast of the Philippines, when it went missing in September 1943. His gravestone was placed to honor his memory, but his body remains lost at sea with men he served beside.4

Seaman First class Robert R. Nelson was nineteen when the aircraft carrier he was serving on, the USS Franklin, was attacked by Japanese bombers on March 19, 1945. Nelson was one of over 800 sailors who were killed in the attack. His body was never recovered. He was likely buried at sea with hundreds of his fellow sailors.5 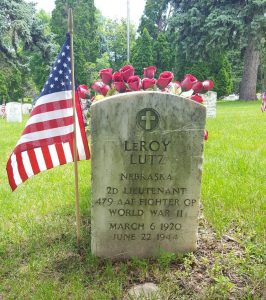 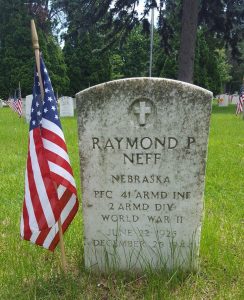 When you walk through a cemetery, you are surrounded by thousands of stories. Stories of love, joy, loss, pain, sorrow, and sacrifice. When you walk amongst the graves of the fallen, there are often tales of valor at your feet. Like that of 2nd Lieutenant LeRoy Lutz, a pilot who was shot down over the village of Mardeuil, France. He had time to bail out, but instead stayed with his P-38 in order to navigate the plummeting plane and drop his bombs away from the houses of the village. He was killed on impact. Citizens from the village salvaged pieces of the plane, hiding them from the German forces who occupied the area. Many years later, it was given to Lutz’s son, Richard, who was twelve years old when his father was killed. A park in Mardeuil bears Lutz’s name.6

Nineteen-year-old Raymond P. Neff was killed on Christmas Day 1944 during the Battle of the Bulge. He was buried in a field grave in the village of Sorinnes. When his body was repatriated after the war, the wooden cross which marked his grave was left behind and many years later discovered on a farm in the Belgian Ardennes. A few months prior to his death, Neff received the Purple Heart for a head injury he sustained in France. He was posthumously awarded the Silver Star for his actions a month before he was killed. It was presented to his father, William S. Neff, at a ceremony held on the campus of the University of Nebraska in Lincoln.7 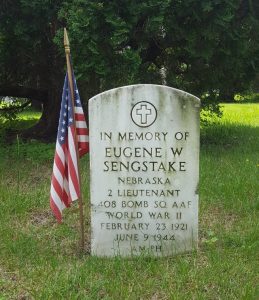 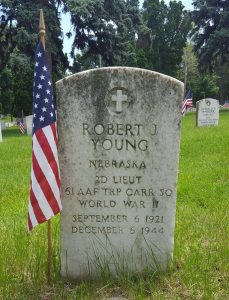 2nd Lieutenant Eugene W. Sengstake was twenty-three years old when his B-24 bomber went down between Palau and Wakde Islands. No sign of Sengstake or his plane were ever found. Years later, his son, Eugene Sengstake Jr., who was an infant when his father was killed, shared a collection of his father’s belongings with the University of Nebraska-Lincoln History Harvest. It contains items such as the contents of his wallet, military pins and ribbons, and correspondence from the military regarding his disappearance.

Robert J. Young was killed in a plane crash in Belgium at the age of twenty-three. The Nebraska State Historical Society holds the telegram his father, Joe R. Young, received informing him of his son’s death.

These men are gone now. But much of them remains. Max Long’s sister still decorates his grave on his birthday. A French novelist wrote a book inspired by the sacrifice of LeRoy Lutz. Items from the lives and deaths of Eugene Sengstake and Robert Young have been archived so others may connect with, may bear witness to, their service to their country. There is more to these men than just the names carved into row upon row of stone. Each name carries with it the story of a life just waiting for you to discover it.

I am participating in Day of DH 2014 this year and maintaining a blog on their website. Cross-posting my entries here, because hey! I’m actually blogging.

As planned, I have spent the greater part of the day organizing the approximately 2,000 freedom petition photographs I took at the National Archives into a coherent filing system, organized by term, category of filing, and case number and documenting the image numbers in the spreadsheet I maintained as I was photographing. I think I am a little over half done with this process. Though I still have about an hour and a half left to dedicate to the D.C. courts project today, I am turning my attention to my other project–Locating Lord Greystoke. Right now we are in the process of building two corpuses of texts–one that is large, inclusive, and will be used in our text analysis efforts, and and a second smaller one of key documents that will be featured on the project’s website. The document that I am working with now has been reviewed by the project leader, historian Jeannette Jones, who has pulled out selected passages from the text and made note of the people, places, and concepts she wants to be called out on the website. An undergraduate student also working on the project has already run the document through an OCR program, the output of which I will mark up in TEI. The notes on the document prepared by Dr. Jones indicate what will make it into the <profileDesc> tag in the TEI header, which items she wants to appear in the site’s Encyclopedia and thus need to be encoded in the text, and which places are going to appear as mapping points for this particular document. At the moment, the website’s documents are indexed in Solr and transformed by Cocoon, but we are looking into migrating over to a different framework in the very near future. You can  view a draft of this process in action at the project’s website, where we have set up a proof of concept using minimal documents and our first pass at the project’s mapping interface.

A look at my screen: Dr. Jones’ notes; Oxygen, which I use to encode the XML document; and the Google Spreadsheet that is serving as a working bibliography of our project documents.

I am participating in Day of DH 2014 this year and maintaining a blog on their website. Cross-posting my entries here, because hey! I’m actually blogging.

One of the projects that I am working on is a collaborative effort with scholars at another university–Jennifer Guiliano and Trevor Muñoz at the Maryland Institute for Technology in the Humanities at the University of Maryland. Because there are over a dozen people (located in various places) involved in the project, we have turned to the project management tool Basecamp to help organize our discussions and work plans.

Thus far it has proven to be a valuable tool to keep project participants on the same page, though I am definitely interested in methods or tools used by fellow project managers in the Digital Humanities.